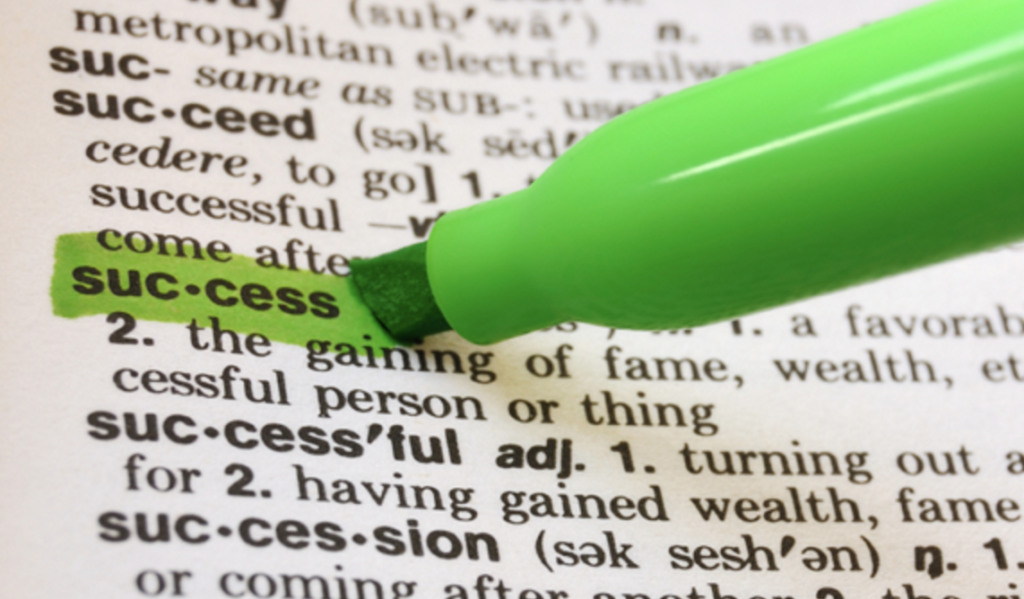 Success. How do you define it? It seems every time someone uses the word ‘success’, someone in the comments section has to ask that question: “Yes, but how do you define success?”

When you look at pop culture and the use of the word success, you get the simple understanding of success as explained in the Merriam-Webster dictionary: Success is.. the fact of getting or achieving wealth, respect, or fame.

Merriam-Webster dictionary: Success is.. the fact of getting or achieving wealth, respect, or fame.

As the focus of this blog is MUSLIM Success, wouldn’t it be essential to review what Allah and His Messenger, sal Allahu alayhi wa sallam, reference when the topic of success comes up? Here’s what I found:

In the Quran, there is a theme of success (falaah in Arabic) connected to the avoidance of Riba. Take for example the following verse (3/130):

Tyranny, crime, lying and conning others

In the pursuit of wealth, respect, or fame, some may attempt vile shortcuts with oppression, crime, or lying or deceiving others. The Quran is clear that, yes, perhaps in the short term it may seem like they are winning, but ultimately those who take this path will never ultimately succeed (Quran 10/17 and 10/77).

What a beautiful understanding of success that Islam teaches us. That success isn’t when one accumulates wealth, power, or fame. Genuine success and Paradise is when one purifies their heart and soul! Subhan Allah. (Quran 91/9 and 59/9) 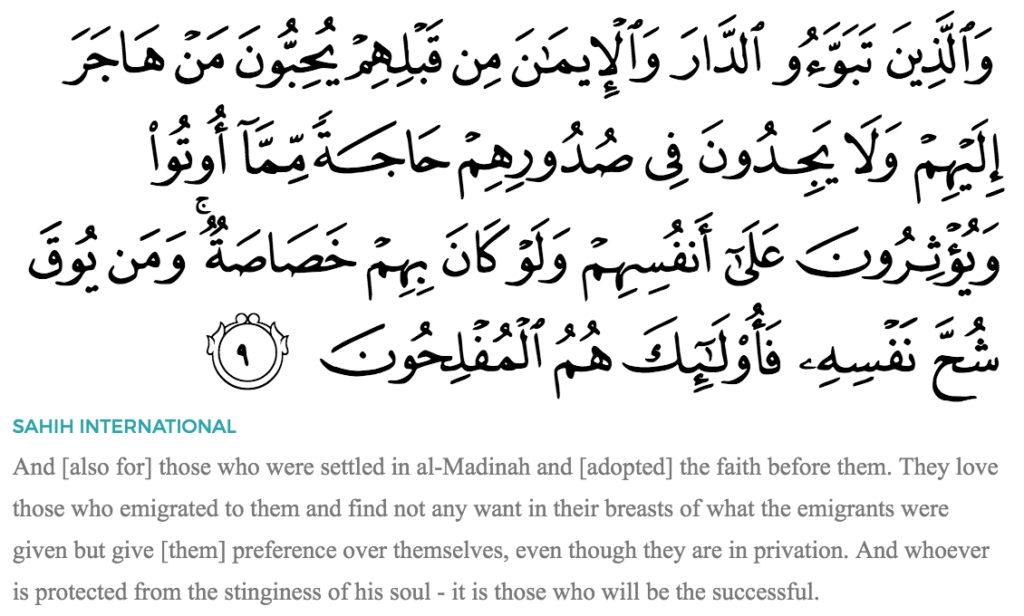 Allah’s Messenger, sal Allahu alayhi wa sallam, said, “Worship Allah as if you see Him. If you cannot see Him, then indeed Allah sees you.”
It is this life of Taqwa, of keeping Allah ever present in your conscious, that leads to success.

From the Sunnah, we see the topic of success come up in reference to:

In the call to prayer: Hayy ‘ala alFalaah — Come to success

On the authority of Abu Hurayrah (may Allah be pleased with him) from the Prophet (ﷺ), who said:
Allah (mighty and sublime be He) says: The first of his actions for which a servant of Allah will be held accountable on the Day of Resurrection will be his prayers. If they are in order, then he will have prospered and succeeded: and if they are wanting, then he will have failed and lost.

Abdullah bin ‘Amr bin Al-‘as (May Allah be pleased with them) reported:
Messenger of Allah (ﷺ) said, “Successful is the one who enters the fold of Islam and is provided with sustenance which is sufficient for his day’s needs, and Allah makes him content with what He has bestowed upon him.” [Muslim].

Allah’s Messenger (ﷺ) said, “If he is telling the truth, he will succeed (or he will be granted Paradise).” [Bukhari]

Your turn: While reading this topic of success, what ideas, feelings or reflections came to your mind? Write in the comments section below..

Love this article. I remember the ilm fest in London years ago when Success was discussed in terms of how Allah describes it in Surah Al Muminoon verses 1-11. That was a really eye opening experience and I have been driven by that knowledge ever since Alhumdulilah

Dear Ustaad Ashraff,
I love your articles and the ways of inventions you write them. Of course the real success is the Jannaah in the Akhiraa! I’d been already convinced on what you said above article. So, when I read it, my faith summed on the topic.

Though, as a god fearing human being, I ask you that is it permissable to pay something to get my works done where there is no any legal payment. i.e, it’s bribe but not such meant here. How? I tell you – discrimination practicing organization / government devices are there where we have catch anyone who has influence to get our work done. This situation some people caliming something from us. Very few are not taking money. Here – how to name this pay? Bribe? Is it OK? Please advise me. Boost me to avoid this kind situtaion and to achieve my works without this illegal pay.

Salaams to all, I think, we have the Quraan injunctions and Hadith to support Action, and a lot of the daily common and logical manners are based on the above in society, the Question is how much of it is portrayed in our daily actvities without stint(commitment) and are we not obliged to recognize the commitment as onlookers and Honour that action with recognition that Honour and support it deserves for being the correct action that is taken, I hope I have not swayed away from what you intended in my comment, I think I just went directly for the bottom line here
Ismail

Remember all Muslims in your good du’as brothers/sisters in Islam.

Wasalaam from the Philippines 🙂

Thank you for sharing your thoughts. I really appreciate your efforts and I am waiting
for your next post thanks once again.

I experienced, when I pray as if ALLAH is in front of me, I found the prayer is answered very soon.

Alhamdulillah this write up has really inspired me,and has brought my heart closer to my creator.

Alhamdullillah. We give God the glory for guiding us to Islam. With Islam, one is able to see the true meaning of success. As a Muslim, I will regard success as the attainment of jannah. May Allah make it easy for us. Jazakallah.

As Salaamualaikum, Al hamdulillah for what you are doing for this Deen and lives of Muslims and others

This is Amazing. I so much love and appreciate this. How I wish myself could be as knowledgeable as you are.

As Salaamualaikum, Al hamdulillah for what you are doing for this Deen and lives of Muslims and others. To me success is when we can struggle to overcome the things of this dunyah and strive to please Allah swt.

This is Amazing. I so much love and appreciate this. How I wish I could be as knowledgeable as you are.

Mr. Alsharif,
I personally appreciate your great work.
I want to ask one question.
IS QUR’AN IS NOT SUFFICIENT
You referenced Hadis.

I agree and appreciate you

Success is freeing oneself from the gluttony of ones’ desire (nafs). Prostrating to Allah on time of Salah asking Allah to prtoect him from evils deeds; engage in zikirullah… and focus in the preparation to meet Allah after this temporary life. For death in a gate to the final stage of life where one is to reap the benefit as well as the punishment of his deeds.

Alhamdulillah! more blessings to the Aleem M. Alshareef for this blog. It clears the mind and soul of those who are sincere seekers of truth. Truly, it makes ones successful after reading this article. Thanks so much♡♡♡

Masha Allah, endless bless to you for this lecture.

Assalamualaikum brother Muhammad Alsharif Jazakallahu khairan for your very educative writeup. It helps us a lot. May Almighty Allah rewards you in this world and hear after

Its well said,we think success,is in this world,but The prophet Muhammad (saw) said we should live like we will never see tomorrow.& also said when we die our eyes see more.

Absorbing facts and eye opening ones too. Understanding religion opens our perspective towards life and changes our priorities. Alhamdolillah

Jazakallah ya Sheikh for this wonderful reminder.

i like it,very true definition of success in the Roshni of QURAN n HADITH “Of course success is not only worldly achievements..

Sir, sucess can be defined in many ways be it physical,mental attitude or spiritual achievement. MOST HONOURA BLE in line with Allah has command to all humans.- That ALLAH is All Providence All Knowing All Benevolent declared in Al Quran that He create All Beings To Know Him. And whoever intimately knows Him has achieve Spiritual Success and being Examplary to All Mankind

Indeed, Am more Satisfied beign a Muslim with this little but mighty piece